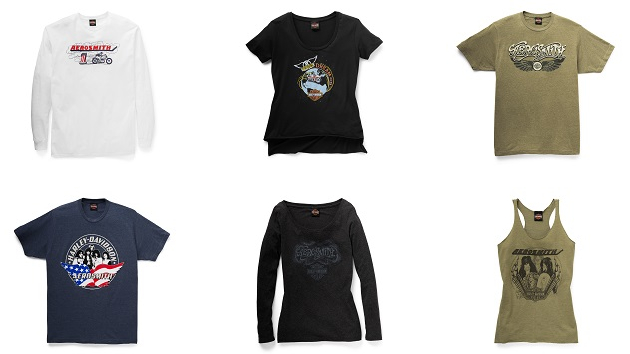 Bravado/Harley-DavidsonAerosmith has partnered with Harley-Davidson to launch a limited-edition apparel collection for men and women that incorporates images and designs associated with the legendary rock band and the iconic motorcycle company.

“We’re thrilled to be partnering up with Harley-Davidson on this capsule,” says Aerosmith guitarist Joe Perry. “They’re an American institution and share an authenticity and effortless style that encapsulates what Aerosmith is all about. We’re excited to get the collection in the hands of the fans.”

The collection features a total of 17 styles comprised of six themed graphic designs: “Burnout,” “Dream On,” “Pump,” “Aero Force One,” “Toxic Twins,” and “Draw the Line.”

“Burnout” was inspired by the cover of Aerosmith’s self-titled debut album, and features imagery that highlights the beginnings of the band and Harley-Davidson.

“Dream On” is named after Aerosmith’s classic song, and illustrates the enduring influence of the band and the motorcycle company.

“Pump” is named after Aerosmith’s hit 1989 album, and brings together the band’s and Harley-Davidson’s recognizable logos to create a unique design.

“Aero Force One” salutes the group’s devoted fans and boasts a design celebrating the alliance between Aerosmith and Harley-Davidson.

“Toxic Twins” is the nickname of Aerosmith’s songwriting partners — Perry and singer Steven Tyler — and the design combines the band’s and the company’s logos surrounded by snakes.

And “Draw the Line” combines the cartoon depiction of the band as seen on its 1977 album of the same name with the Harley-Davidson logo and images of a tire tread and exhaust pipes.