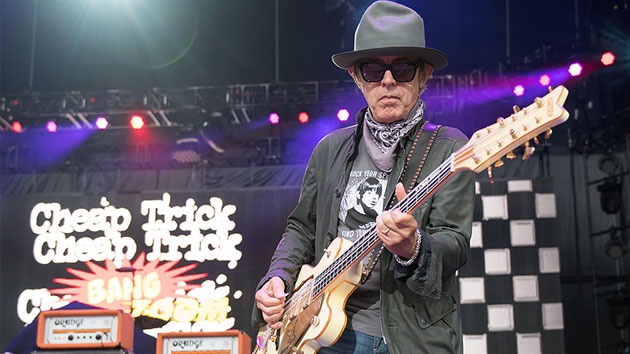 Mike Pont/Getty ImagesOn Thursday night, Cheap Trick celebrated the release of their new studio album, In Another World, by performing on CBS’ The Late Show with Stephen Colbert.  Fans who watched the band’s rendition of the rocking “Boys & Girls & Rock N Roll” probably noticed that bassist Tom Petersson was sitting down throughout the performance, and now he’s revealed why that was.

In a message posted on CheapTrick.com, Tom, who turns 71 next month, explains, “I had to have open heart surgery a month ago and I’m under doctor’s orders to take it easy. I’m currently recuperating and slowly but surely getting stronger every day. Can’t wait to get back to see all of you again soon.”

You can check out Cheap Trick’s Late Show performance on the program’s official YouTube channel.

In Another World was released today, and features 13 tracks, including “Boys & Girls & Rock N Roll” and a cover of John Lennon‘s “Gimme Some Truth,” the latter of which boasts a guest appearance by Sex Pistols guitarist Steve Jones.

Cheap Trick is scheduled to begin a tour of Australia on April 30 called Under the Southern Stars 2021 that also features Bush and Stone Temple Pilots. It’s not known if Petersson will be participating in the trek, which runs through May 16.