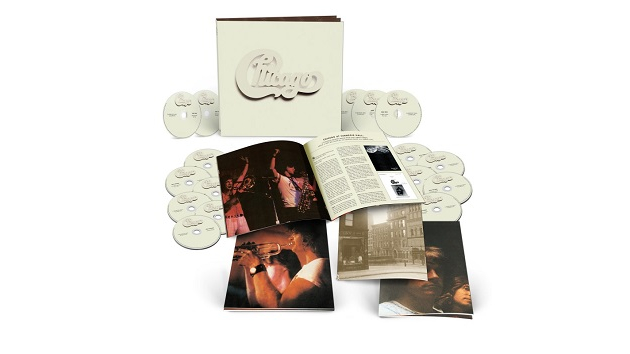 RhinoIn October 1971, Chicago released a four-disc box set titled Chicago at Carnegie Hall that was culled from an eight-show stand that the band played in April of that year at the famous New York City venue. Now, an expanded 16-CD set called Chicago at Carnegie Hall Complete featuring audio of all eight concerts will be released on July 16 in honor of the 50th anniversary of the original performances and live collection.

Chicago at Carnegie Hall Complete is priced at $179.99 and can be pre-ordered now exclusively at Rhino.com.

The collection comes packaged with replicas of three posters included in the original box set and a 28-page booklet featuring photos from the 1971 concerts and new liner notes. The recordings were remastered from the 40 original concert tapes by founding Chicago trumpet player Lee Loughnane and engineer Tim Jessup.

The band’s Carnegie Hall shows took place from April 5 to April 10, 1971, a few months after the release of the horn-driven rock band’s third studio effort, Chicago III. Among the classic songs that were part of the group’s sets were “Beginnings,” “Does Anybody Really Know What Time It Is?,” “Make Me Smile,” “Colour My World” and “25 or 6 to 4.”

Chicago at Carnegie Hall reached #3 on the Billboard 200 chart, and was certified platinum for sales of more than 1 million units in the U.S. The collection is Chicago’s best-selling live release.

You can check out a video trailer for Chicago at Carnegie Hall Complete at the band’s official YouTube channel.