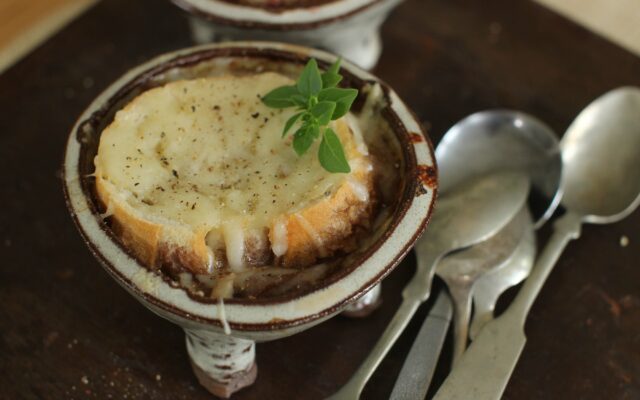 This Sept. 14, 2015 photo shows grilled French onion soup in Concord, N.H. This dish is from a recipe by Elizabeth Karmel. (AP Photo/Matthew Mead)

With tons of vendors serving a huge variety of Soups, Soup themed dishes, and more, this will be a foodie event that you will not want to miss

The Dayton Soup Fest is happening on November 26th at the Yellow Cab Tavern in Downtown Dayton. Things get started at 4pm and will go until 9pm. The official vendor list will be released soon, and if you’re worried about the cold, Soup Fest organizers have got you covered.

We’ll have both of our indoor spaces open for seating and tons of heaters and fire pits on our beer garden patio at The Yellow Cab Tavern during this community, family fun event!

I don’t think that anyone will argue that Fall is officially soup season, so the Dayton Soup Fest is happening at the perfect time. I’m hoping that some of the vendors will venture into the “stew” or “chili” world. I know they arent technically soup, but I think we can bend some rules for the inaugural soup fest right?!

If you would like to be a sponsor or vendor you can get more information about being a part of the first Dayton Soup Fest here.