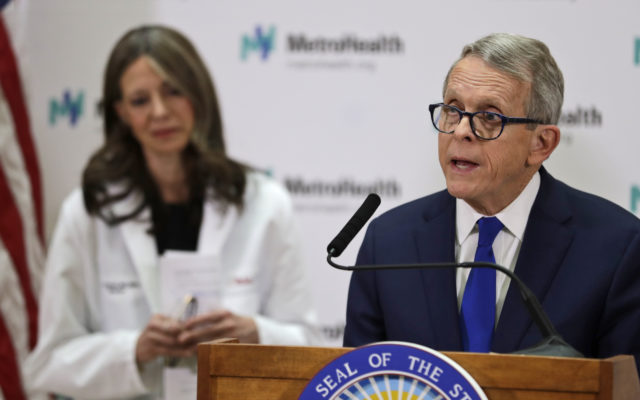 Ohio Governor Mike DeWine gives an update at MetroHealth Medical Center on the state's preparedness and education efforts to limit the potential spread of a new virus which caused a disease called COVID-19, Thursday, Feb. 27, 2020, in Cleveland. (AP Photo/Tony Dejak)

The Ohio Department of Health’s latest report shows the state now has eclipsed the 20,000 mark in total cases. The 560 newly reported cases bring Ohio’s total to 20,474. There have now been 1,056 deaths from the coronavirus in the Buckeye State.

We asked for the creation of a 21-day trend chart instead of only 5 days. I always look at hospitalizations – the trend line there isn’t as good as we would want, but it is going down. pic.twitter.com/ud15kpnXgl

As we approach the Responsible Restart Ohio opening for retail on May 12, Governor DeWine reminded all Ohioans that retail can right now do curbside or by appointment service.

“This won’t work for all businesses,” DeWine said. “But if it works for your retail company you can do this today.”

Governor DeWine says the state’s restaurant group has been working very hard, and are nearly finished with their plan.

“Within the next several days we’ll be rolling out the protocol for reopening restaurants,” said DeWine. “We’ll also be able to announce a reopening date.”

The Governor mentioned on Friday that other groups have been formed to help design a reopening plan for the businesses that have yet to do so.

Governor DeWine took some time this afternoon to address some of the protesters in Ohio. DeWine explained that he is a big advocate of the first amendment but says there should be certain boundaries as to where and who the demonstrations involve.

“I respect the First Amendment,” said DeWine. “I am fair game. But, it is not fair game to be disrespectful or obnoxious to the news media. To treat them with disrespect and to not practice social distancing with them, I find that very sad.”

DeWine then spoke on the protests that took place this weekend in the neighborhood of Dr. Amy Acton with the Ohio Department of Health. The Governor once again told protesters that if they have an issue with anyone, it should be him.

“I’m the elected official who ran for office,” said DeWine. “I’m the one who makes policy decisions. Members of my cabinet work hard, but I set the policy. When you don’t like the policy, again, you can demonstrate against me, that’s fair game. But to bother the family of Dr. Acton, that’s not fair game. It’s not right. It’s not necessary. The buck stops here. I’m the responsible person.”

Last week, Governor DeWine announced that over the next month Ohio is expanding its testing capacity. The Governor says expanded testing will give Ohio a better ability to learn who is sick and determine how to respond. With more tests, the state will continue to emphasize the testing of those who are:

“It’s important to remember, that testing is only one response to this virus,” said DeWine. “It allows us to quickly identify individuals infected with COVID19, promptly isolate them, and determine who they’ve been in close contact with to minimize the spread.”

While the testing capacity is increasing, DeWine says it is still limited. Because of this, the Ohio Department of Health has issued new testing guidance, which can be viewed below. 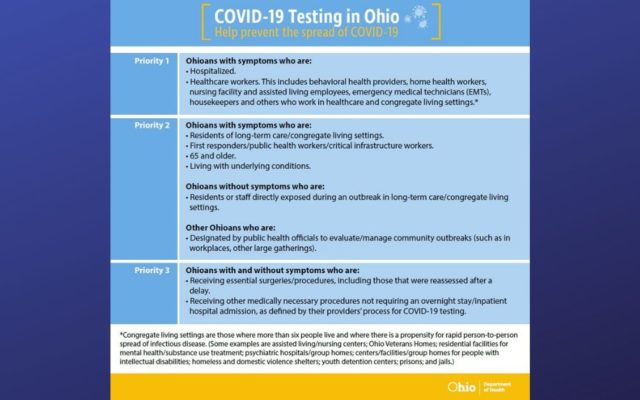 “Eventually, we’ll be able to test those with mild symptoms, even asymptomatic people will eventually be tested,” said DeWine. “But we’re not at the point where we have that testing capacity yet.”

Lt. Governor Jon Husted spoke this afternoon, providing an update on when Ohioans can expect their local BMV offices to reopen.

“It will happen later in May, but we don’t have a set date yet,” said Husted. “We are working on a plan for social distancing and for implementing other safety measures.”

Husted says the reason for the late-May opening is so Ohio can expand the Ohio BMV get in line online program to all deputy registrar locations that do not already have this service.

“This will help us avoid large crowds and allow an orderly process,” said Husted.