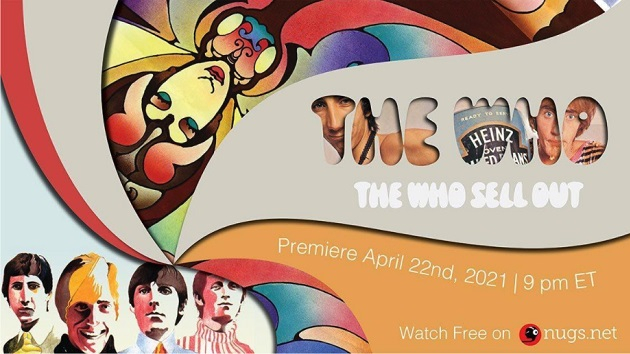 Courtesy of nugs.netIn advance of the upcoming expanded reissue of The Who‘s 1967 album The Who Sell Out, a new installment of the Classic Albums documentary series focused on the inventive record will be streamed for free starting April 22 for a limited time on nugs.net, the nugs.net YouTube channel and the band’s YouTube channel.

The documentary will take an in-depth look at the making of The Who’s loose concept album, which was intended to parody British pirate radio stations and included the band’s recordings of fake commercial jingles that linked the full-length songs. The doc features new interviews with Pete Townshend and Roger Daltrey, as well as archival footage of and conversations with late Who bassist John Entwistle and drummer Keith Moon.

The presentation also includes segments focused on the album’s multi-track recordings, the history of the U.K.’s pirate radio stations, and how the record reflected the culture and art of the time.

The livestream will start at 9 p.m. ET on the 22nd and will be available through the evening of April 25 at 12 a.m. ET. The U.K. and Ireland will not have access to the stream.

As previously reported, The Who Sell Out reissue will be released on April 23 in multiple formats and configurations, including a Super Deluxe Edition featuring five CDs and two seven-inch vinyl singles.

The Super Deluxe version will feature a whopping 112 tracks, including 47 previously unreleased recordings, and also comes with an 80-page hardback, plus rare photos and memorabilia.

Meanwhile, the latest in a series of free three-song digital EPs featuring advance tracks from the reissue has been released. It includes the full version of “I Can See for Miles,” an alternate take of “Magic Bus” and the rarity “Facts of Life.”

August 1st, 2021
View full playlist
Connect With Us Listen To Us On