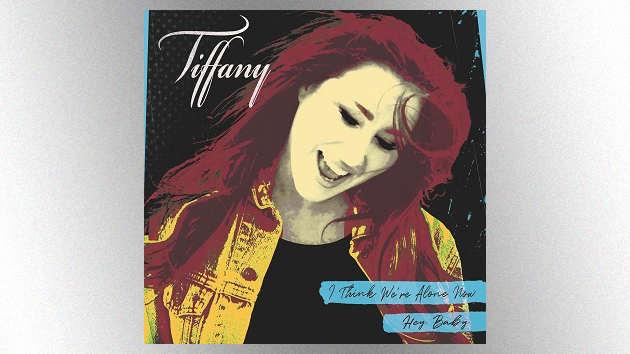 Go On Then Records/Deko Entertainment’80s pop star Tiffany has announced plans to release a brand-new single titled “Hey Baby” as part of a limited-edition 12-inch vinyl picture disc on April 23.

The release also will feature an updated version of Tiffany’s chart-topping 1987 cover of Tommy James and the Shondells‘ 1967 hit “I Think We’re Alone Now” that she re-recorded in 2019.

The picture disc, which is pressed on blue vinyl, features Tiffany’s name in white script lettering on one side. You can pre-order it now at MerchBucket.com.  Special bundles also are available packaged with a T-shirt and a poster.

“Hey Baby” also will be featured on Tiffany’s upcoming studio album, Shadows, which is due out later in 2021. She introduced the song, and other tunes from Shadows, during a special livestreamed concert in Las Vegas dubbed Shadows from the Strip that premiered on March 20.

Tiffany was just 16 years old when her self-titled debut album hit #1 on the Billboard 200, which made her the youngest female artist ever to have a #1 album on the tally. The record featured “I Think We’re Alone Now” and another chart-topping single, “Could’ve Been.”