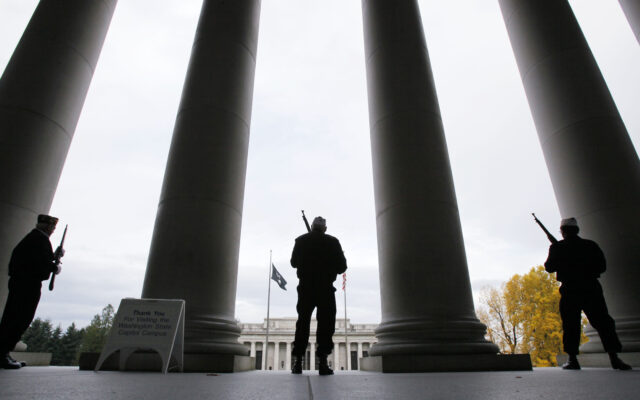 VFW color guard members prepare to fire a 21-gun salute from atop the Capitol steps during Veterans Day observances there Thursday, Nov. 11, 2010, in Olympia, Wash. Fighting in World War I ended when an armistice, or temporary cessation of hostilities, between the Allied nations and Germany went into effect on the eleventh hour of the eleventh day of the eleventh month in 1918. Armistice Day, primarily a day set aside to honor veterans of World War I, was changed in June, 1954, when Nov. 11th became a day to honor American veterans of all wars. (AP Photo/Elaine Thompson)

Veterans in and around the Miami Valley will be honored on November 11th, and here is a look at the events and deals that veterans can take advantage of.

Veterans Day is when we honor those that have chosen to serve our country in the armed forces. That honor comes in many different forms, but one of the most popular is free food! I know that sounds like a joke, but you’ll probably be surprised how many free or discounted food options there are for veterans. There are also many festivals planned for veterans on Friday and throughout the weekend. We’ll take a look below starting with some of the local food deals you can get.

BJs Restaurant and Brewhouse has a few different choices on the menu for Veterans Day.

Casey’s is doubling down to help on Veteran’s Day this year. Veterans and active military can get a free cup of coffee on Friday, and they are running their #HereForVets fundraiser throughout the entire month of October.

You can also find great deals at some big chain restaurants like Chili’s, Bob Evan’s, Golden Corral and Applebee’s across the Miami Valley. There are plenty of other deals out there, so if we missed a few just send us a message and let us know.

2022 Veterans Day Events In & Around Dayton

Click on the links below to get more information about each city’s individual Veterans Day celebrations.

If you’re looking for a complete list of national Veterans Day deals, you can get that here.